Written by  IT Support Team Monday, 07 May 2012
Published in WiFi Hotspots
Tweet

Many business travellers would agree that going without wi-fi for any length of time is becoming more and more painful.

On the one hand we have powerful new hardware and software that fits into our pocket or briefcase but on the other hand these multi-media devices are frequently rendered almost useless thanks to inadequate quality and quantity of wi-fi networks.

Of course, there are some solutions which may or may not work for you depending on your situation, like personal wi-fi hotspots which run on cellular networks.

But certainly in America these are expensive, require contracts and come with data caps. Forget about watching movies on the go!

The cloud is only making things easier and at the same time more difficult.

Services like Sugarsync, Evernote and Zoho have given us the ability to carry documents, photographs, video and audio anywhere we go on any device.

But it only works well if you have wireless access when you need it.

And there is nothing more frustrating than going into the bowels of the New York subway system for example, which is devoid of any wi-fi signals, and spending a 45-minute commute wishing you'd remembered to sync devices before you left home.

Somehow it's even worse to go to the airport in plenty of time for a long haul flight and find out the cost of logging on for a few minutes to download an e-book can be almost the same as a monthly internet bill at home, that includes endless downloading of songs and videos.

At some point surely, wi-fi will be considered as an essential. Many hotels still charge $15 - $20 a day for what is often excruciatingly slow internet connectivity.

Why don't they charge for electricity in the room, or water for shaving, or even a fee for using the lifts rather than the stairs? Shouldn't wi-fi come as standard?

But wi-fi providers are constantly trying to catch up. 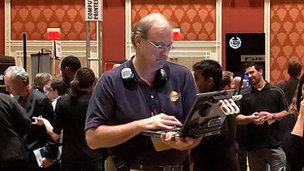 Just one new product like Apple's iPhone 4S can cause major headaches within hours of its release.

Instead of sending photos that were 1MB each, owners suddenly want to send upgraded photos that are 3 or 4MB each. Not to mention new services like Siri (voice recognition software) that also adds to the daily data stream.

If you want to witness wi-fi tested to the maximum, then you need to visit a huge technology convention like the Consumer Electronics Show, in Las Vegas, where every year an event called "Showstoppers" is held in a huge hotel.

Scores of the best known technology companies in the US are trying to demo their latest products, which often rely on a fast connection. Watching are hundreds of journalists who are kitted out with laptops to blog video and photos from the room.

Wi-fi installation expert Alex Pournelle, from Location Connect, is pacing up and down the aisles, with an unusual looking laptop that is crammed with radio receivers of different types sticking up, that measure readings from the room.

He speaks bluntly after watching all the usage bars on his screen stay at 100% for hours.

"Wifi is a victim of its own success. People expect to have infinite bits wherever they go.”

"Wifi is a victim of its own success. People expect to have infinite bits wherever they go.

"For what most people think of as wi-fi there are really only three channels to share, and everyone keeps bumping into everybody else. It's like screaming across a room. If enough people do it, eventually no-one can be heard".

It's like this in lots of places at CES, as the concentration of connected devices moves around. Ironically, it can be almost impossible to communicate at times during what is supposed to be the premiere trade convention in the world for new technology.

Alex thinks there needs to be a new social awareness from people who carry the latest gadgets everywhere with them.

"You are silencing the device, but in a different way. (Wi-fi) is very, very shared so there is a certain amount that can only be done by getting people to turn off their devices."

The problem is that the newest devices feature data intense apps that are permanently updating, fetching new information or syncing without any prompt from the owner. 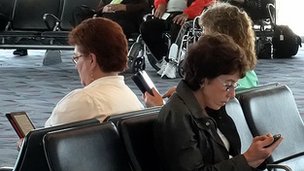 And on top of that, people expect to be able to update Facebook whenever they want to, or carry out multiple text chats complete with photographic illustrations, or take part in live video streaming conversations with relatives around the world. It used to be that email would do.

McCarran International Airport in Las Vegas decided long ago that having a decent wi-fi service was a top priority, because they saw an ever-increasing flow of tech-savvy travellers coming to conventions in the city.

"We've seen a drastic change in the number of people and devices in the airport space," says Samuel Ingalls, assistant director of aviation information systems at McCarran Airport.

"We have about 70,000 individual users per week. This year I would not be surprised if we broke our record of 2,000 simultaneous connections".

A dedicated engineer on staff monitors signals in every part of the complex continuously, and will even go out and investigate new devices being used in the terminals if the user is having problems. 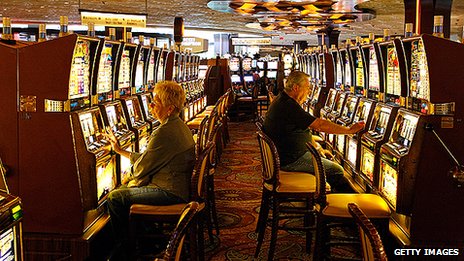 Las Vegas hotels were slow to install wi-fi, worried it would keep patrons away from the casino floor

There are plenty of locations, most notably hotels that shy away from good quality wifi service.

In Las Vegas, in-room internet was originally met with scepticism - casino bosses distrusted any technology that would keep potential gamblers away from the slot machines and tables.

But that has changed too in recent years. Caesar's Palace is building hidden wi-fi terminals into the structure of its newest tower.

It was one of the first considerations when architects were designing interior plans. In the meantime many existing suites now come with personal wi-fi routers. 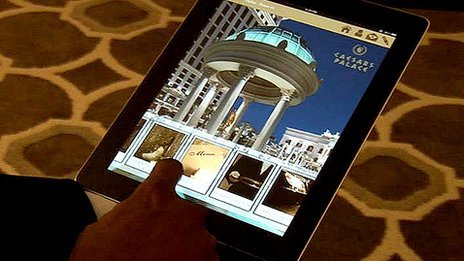 Instead of ignoring or downplaying wi-fi, Caesar's has embraced it, acknowledging that visitors turn up with devices that need to be connected.

It has produced its own iPad app from which customers can book shows, order food, have supplies for the room delivered or contact the car valet a few minutes before reaching the lobby.

Unfortunately for the rest of us that travel in the US at least, it doesn't look as though the overall situation will get better any time soon.

The newest 4G networks are fast but have caps.

More in this category: « Can I use my router as a WiFi hotspot? Free Wi-Fi with that coffee? Why cafes are embracing an age of connectivity »
back to top
Top