Free Wi-Fi with that coffee? Why cafes are embracing an age of connectivity

By Charles Arthur - The Guardian http://www.guardian.co.uk/technology/2011/dec/22/free-wi-fi-access-cafes-uk

As Wi-Fi hotspots increase, small UK businesses are preferring to give access to smartphone and tablet users for free

Any cafe that puts up a sign offering free goods usually does so with trepidation: what if the rush is too great and it costs more to offer than it brings in? 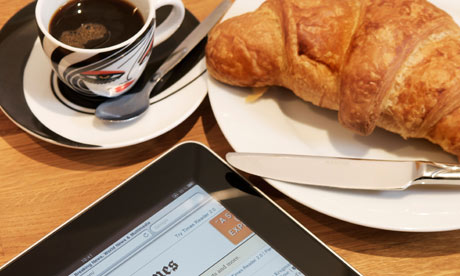 But for Derek Thompson, the proprietor of Gluttons cafe in the market town of Saffron Walden, there was no such worry. For the past 18 months, he has been offering free wireless internet access at the cafe – prompted initially by customers who noticed that there was a Wi-Finetwork covering the premises and asking for the password.

His is one of a growing number of small restaurants and diners that have discovered that as more and more people own smartphones able to send and receive email and browse the web, they are increasingly happy to get a high-speed connection and open it up to customers free of charge.

As the economic clouds darken, they have discovered that the internet is the equivalent of the never-ending coffee cup, only better: it doesn't require heating and barely needs any electricity. And it doesn't interfere with the normal run of business, just enhances it.

"We initially set it up just for our own staff," Thompson explains. "Then people asked for the password, so we did a code number for each person. Then I felt it might encourage customers to come back if we just opened it up. Being an 'eatery' rather than a restaurant, we wanted to get the early morning people who will often sit here for a bit and deal with business things." With, of course, a cup of coffee and perhaps a slice of cake.

Gluttons is hardly alone: more and more food outlets are discovering that a sign – even like the one Thompson uses, which simply proclaims FREE WI-FI lodged in one window – can pull customers in. Earlier in December, the food chain McDonalds announced that customers in its 1,200 UK outlets were downloading 500 gigabytes (GB) of data each day, and that the number of customers had doubled in the past year.

Shrikant Shenwai, chief executive of the Wireless Broadband Alliance, whose members push Wi-Fi – both paid-for and free – says the reason is simple: "it's about how you attract the consumer who has a need to stay connected."

Where this is an emerging culture, of course, there is a counter culture. And a number of niche establishments in some more boho urban quarters are boasting of the fact they have no Wi-Fi – keen as they are to discourage a café full of customers crouched behind screens, failing to engage with each other. Others drop their connections at key times of the day – for instance the Gallery Café in London's Bethnal Green, opted to go Wi-Fi-free at lunch time, to ensure diners were able to find seating amid the coffee-slurping laptop and tablet users

Yet the trend is most definitely towards greater connectivity. And certainly it is the rise of the smartphone which has driven the demand for fast connections everywhere - and for free. Customers are increasingly eager to seek out the oasis of a guaranteed connection that won't count against their monthly data allowance.

The latest data from the communications regulator Ofcom says that smart phone owners make up 46% – or 28m – of UK mobile users, well ahead of other major European countries, and the number is growing by millions every quarter. At the same time though, operators have begun to clamp down on their "unlimited" data offerings over the mobile network. Those contracts, introduced with the iPhone in 2007, are gradually being phased out in favour of tighter data "caps" of around 500 megabytes (MB) per month – sufficient for thousands of emails, or 200 hours' web browsing, or two hours' low-quality viewing of BBC's iPlayer catchup service.

Little wonder Wi-Fi "hotspots" are hotly sought. The Office for National Statistics calculated recently that 4.9m people connected through Wi-Fi "hotspots" in 2010 at locations such as hotels, airports and cafes in 2010 – up from 0.7m in 2007.

And the growing hordes seeking a connection, especially among buildings where the mobile data signal often fails, often shun paid-for services such as BT's OpenZone and The Cloud in favour of places where connection is thrown in with a croissant. Although Shenwai remarks that "in the end, someone has to pay for that connection" – and that it might be added on to the price of food or drink. But few people will pay for Wi-Fi if they can walk around the corner and get it for free.

Added to that, London mayor Boris Johnson pledged in 2010 that there would be city-wide Wi-Fi in the capital in time for the 2012 Olympics, when data networks are expected to struggle as millions of people try to watch video streams of key events. Significantly, he said nothing about pricing - and no more details have been released about the project since.

But a number of cities including Bristol and York have experimented with free Wi-Fi, often successfully, to attract people to markets and cafes.

But what once seemed like an added extra is fast becoming a necessity. Even within Saffron Walden's small town limits, a two-minute walk will take you past Starbucks (which offers free Wi-Fi through a deal with BT's OpenZone division) to Mocha, a short-order cafe where the menu is written on a giant blackboard, the staff are always moving, and the Wi-Fi is free – though the password changes every couple of weeks. (That ensures free riders don't just sit outside not buying anything.) "It was my brother originally, he had it upstairs and people asked for it," says the manager James Slade, returning from a table. "We've had it about a year. But you can see it makes a difference – people come in for a coffee and they're using their phones. It's definitely been worth it. And free – well, it ought to be free, shouldn't it? It should be free everywhere."